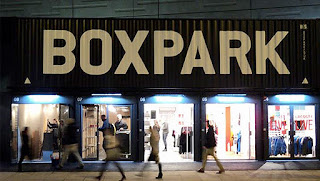 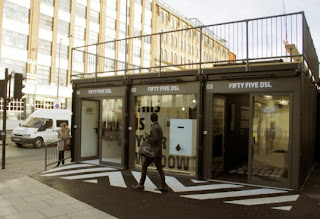 No more than two years ago you could use the term "pop-up" retail and people would look blank wondering what you were talking about. Then it became synonymous with short-life stores that took over empty units in malls when a "proper" tenant could not be found or where there was a gap between tenancies. But last autumn the pop ups moved out of the mall and into a new type of short-term home - adapted sea containers. On a 4.7 hectare former railway goods-yard site in Bishopsgate in East London that has been derelict for at least forty years, a short-life two storey "mall" has been created, which has been named and branded as "Boxpark" and its creators claim its the world's first pop-up mall.   Designed by architects Waugh Thistleton it is such an obviously good way of using a vacant and derelict site that you wonder why its not been done in London before. Within a few months of its construction being completed it has become a new destination for a young audience that wants cool and edgy fashion from retailers who could not afford the rents of traditional malls or high street locations and who would probably not want to operate in such locations. The Boxpark brand, and I do not mean the graphic logo, has, in a few months become synonymous with being hip, being edgy and cutting edge and draws a smart art, culture and office crowd to its shops, eateries, bars and hang-out space, whose offer ranges from retro chic to tailored couture. This is yet another example of how an innovative retail concept has created a new kind of destination and changed the brand of a place from "derelict" to "desire".