The power of retail to change the nature of place 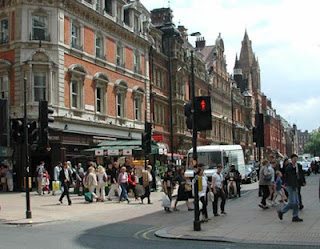 Photograph by George P. Landow from The Victorian Web

I ﻿often wander around the West End of central London to keep abreast of the changes in its retail offer, in large part because I used to work as a consultant for the New West End Company and we tracked changes in the retailers and attractions of the area, rents, consumer spend and visitor numbers.

Just recently I became aware that a new record had been set for rental levels in the area, already one of the world's most expensive retail locations. Reports in the UK property press indicate that Italian luxury goods company Salvatore Ferragamo intends to extend its lease in Old Bond Street at a rent the equivalent of £1,000 per square foot, which may well make it the most expensive shop in the UK. Until this development the most expensive rent had been paid by Piaget, the Jewellers, at £965 psqft.

So whats driving this? In effect its a desire by more so called luxury brands to obtain or expand a presence in what must already be one of the world's most concentrated collection of luxury brands. There is a real desire to get a slice of the spend of the super rich. Through their increasing presence and concentration these brands are creating a place and destination characterised by expensive prices, exclusivity, rarity, and aspiration.

As there are very strict planning controls on development in Mayfair which limit new development this incoming wave of luxury brands is gradually extending the offer of the core shopping streets, particularly north along New Bond Street in the direction of Oxford Street where Belstaff will soon be joining the likes of Fendi, Missoni, Coach and Hubot.

And its not without some regrettable consequences related to the traditional character and offer of the area as these new kids on the block buy up or encourage the older established brands of the area to sell out and move on, for example Mallet antiques who sold to Fendi. And I suspect that the remaining galleries and antique dealers are going to be tempted to depart by the minted international retailers who are prospecting in the area.

To me this is another example of the power of retail brands, both singly and in numbers, to alter the offer and experience of streets and areas, to focus their offer on specific markets and price points and to extend their customer base in ways that no amount of detailed retail planning by local authorities or people like me might ever achieve.
Posted by Unknown at 08:52